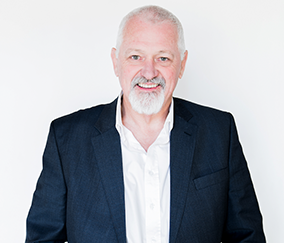 “If you always believe you will learn something new tomorrow, you will never be afraid to share what you know today.”

In an advertising career spanning over 40 years, Gordon Muller has held senior management positions at a number of major international advertising agencies, including McCann-Erickson, Bates and Ogilvy and has served on the board of Saatchi & Saatchi, the MediaShop and most recently as Managing Director of OMD South Africa.

As an independent media consultant, Gordon offers a depth of communication services, ranging from workshop facilitation and customized training programme development to strategic media consulting, auditing, and coaching. His books Media Planning – Art or Science and Advertising in the OOH Zone have been widely utilized by tertiary education institutions across Africa. He has recently published It’s all done with Mirrors – Some reflections on the media industry in Mzansi 1992-2015.

He is a keen sportsman, having represented KwaZulu Natal at u20 level at both rugby and tennis, and has run over 70 marathons and ultra-marathons including four Comrades Marathons.

He has been married to Sue for 40 years and has 3 children and 8 grandchildren.